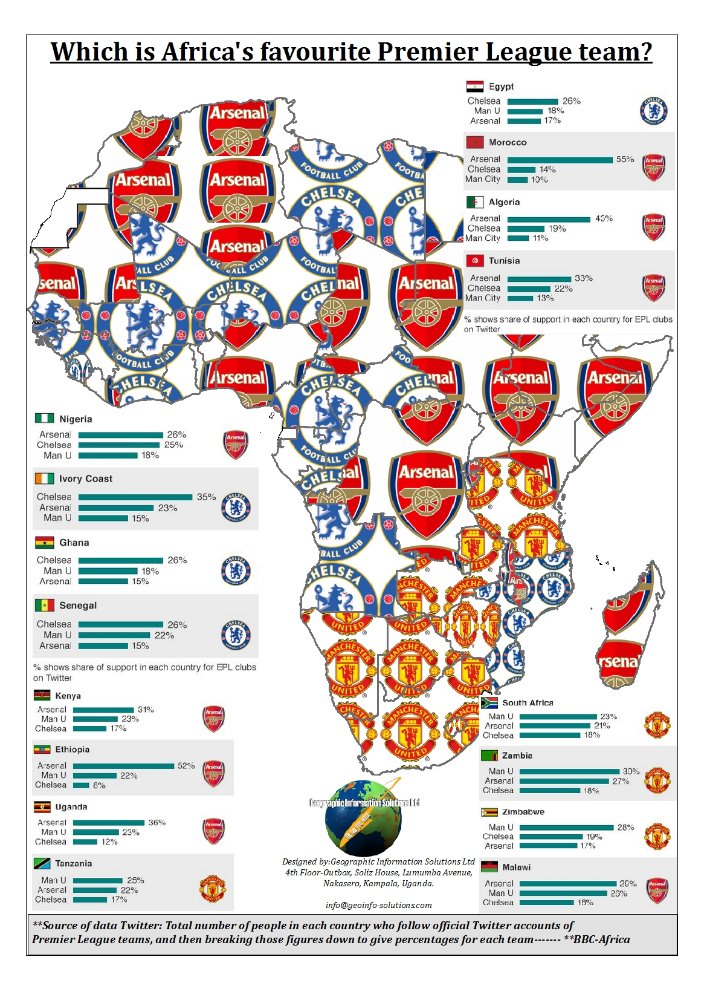 Two weeks ago BBC aired and published an interesting article asking the  question. “Which is Africa’s favourite English Premier League Team?”
Having already tried to guess the answer to the above, below is another questions for you to answer quickly

Which is your countries favorite English Premier League Team?

If you live outside Africa: find out for your country by clicking a link at the end of this article
Twitter integrated data from two sources to come up with the best answer:- Social media and GIS.  They did this by taking the total number of people in each country who follow official Twitter accounts of Premier League teams, and then breaking those figures down to give percentages for each team. According to twitter this is how the teams performed:
Social Media (Big Brother)
In an era where companies compete to make their brands distinctive the ultimate solution seems to be the establishment of consumer-brand linkages at the sensual and emotional level. This way marketers aim at developing deeper, long-lasting, and strong brand attachments for the consumers, social media is turning out to be the final jig saw in that puzzle.
The rise of social media has given insights about consumers like no other survey ever…..social media is a marketeers magic wand. Its the “Big Brother” that see’s and listens to everything you say or do…… It gives marketeers unprecedented access to the hearts and souls of consumers.
The beautiful game (Emotion)
“The beautiful game”,…….a sentence used to describe only one sport in the world and that is Football aka Soccer……

“For football fans in Africa, the UK’s English Premier League (EPL) is King, the ultimate championship, their main place of worship. Football is not a sport here, it is a religion. “

It takes only an exhilarating match like that played over the weekend between, Manchester City and Chelsea, for you to realize that……90 MINUTES locked up and sweating in one room packed with over 200+ people on a Sunday afternoon….. is not to listen to the latest gospel according to St. Luke…….it is to worship the game of football…..
GIS (the bridge)
Our passion for the sport is a great marketing opportunity for brands looking to expand to any of the 54 markets within the great continent,  of course  companies trying to leverage this will have to ask… the same question at the beginning of this article.And GIS can help you do that, as demonstrated by the map below
According to the BBC the global football brand is followed by more than a billion people around the world and 260 million of these are in Africa. GIS  can help streamline the huge quantity of data churned out by twitter, Facebook by putting it into perspective within each of this 54 markets.
We may never be able to give a definitive answer, but definite enough to make an informed decision.
Social media, Sports and GIS can give companies this insight and perspective that can then be linked to lead companies and organizations to tailor their products to various markets that fits the equation; So next time you see a banking institution, insurance company, joining forces with an English Premier League team, in your country don’t be surprised. That they prefer one team over the other………

Big brother, the beautiful game and GIS have teamed up to find you…..

21 thoughts on “Social Media, Football and GIS: We are out to find you”

There are no upcoming events.